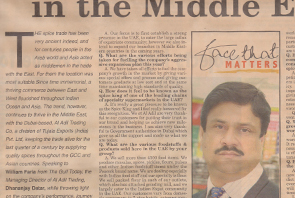 The spice trade has been very ancient indeed, and for centuries people in the Arab World and Asia acted as middlemen in the trade with the East. For them the location was most suitable. Since time immemorial, a thriving commerce between East and West flourished throughout Indian Ocean and Asia. The trend, however, continues to thrive in the Middle East, with the Dubai-based, Al Adil Trading Co. a division of Tulaja Exports (India) Pvt. Ltd. keeping the trade alive for the last quarter of a century by supplying quality spices throughout the GCC and Asian countries. Speaking to William Faria from The Gulf Today, the Managing Director of Al Adil Trading Dhananjay Datar, while throwing light of the Company's performance, journey and future plans, also disclosed that the economic downturn had very little impact on the food industry and Al Masala King Trading continues to expand, opening several major outlets in the UAE. Dhananjay however revealed that the company has witnessed a 40 percent increase in turnover ever since his wife, Vandana took over as the company's Finance Director. 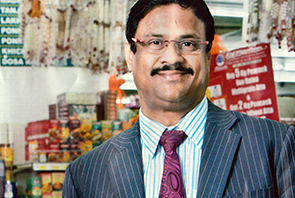 The Spice of Life

He was so poor he couldn't afford a bicycle and dream of nothing more than a square meal, but today Dhananjay Datar is Managing Director of the Al Masala King Group and drives a bespoke Rolls-Royce. He tells Suchitra Bajpai Chaudhary his inspiring tale of struggle, survival and success.

In the almost 30 years since opening its first store in the UAE, the Al Adil Group of grocery shops has acquired a cult like status among Indian expatriates. That's because with 8000 varieties of authentic Indian foods, including spices, pickles and poppadoms, it's a store that literally bottles the taste of home. It was created in 1984 by Mahadeo Datar, and his son Dhananjay has made the tastes, smell and sights of Indian delicacies so irresistible that there are now 32 branches across the country, with 17 in Dubai.

Today Dhananjay, 48 is ranked 19th in the top 50 list of richest Indians in the Gulf with a total net worth of $650 million (Dhs. 2.4 billion). But he hasn't forgotten his humble beginnings in a small village in Maharastra, India. 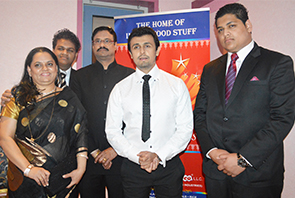 Records 200% growth, opens 19 superstores in just five years Dubai-Al Adil Trading Co. UAE's leading name for Indian foodstuff, spearheaded by Al Adil Dhananjay Datar, CMD of the group, celebrated its 30th anniversary celebrations really special, the Datar Family, along with their team, came up with the concept of doing a Press Conference on a bateaux, which is a French boat, the only one of its kind in Dubai. Research showed that such a feat had never been done before by anybody in the world, and Limca Book of the World Records acknowledged this by presenting a certificate of this record created by Al Adil to Dhananjay Datar, on the bateaux itself. This is the second time that Al Adil has created a unique world record. During the silver jubilee celebrations, the Press conference was held on a Royal Jet 737 Boeing Business Jet, which hovered 30,000 feet in the skies for three hours over UAE. 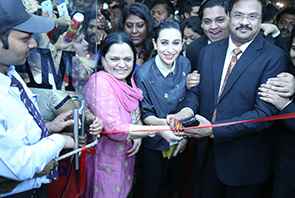 Indian Actress Karishma Kapoor and Dr. Dhananjay Datar jointly inaugurated its new Indian Outlet. Karishma Kapoor, the leading film star from Bollywood and Dr. Dhananjay Datar, popularly known as Al Adil jointly inaugurated Al Adil first outlet in India. Dr. Datar in a span of two and a half decades has turned Al Adil into a huge Business Administration, has been ranked No. 14 in the Arabian Business ranking covering the entire Gulf Countries and has been ranked No. 44 in the Forbes Middle East in the Arab World.

"India has a special place in my heart and I am proud to be an Indian," says Dhananjay 'Al Adil' Datar, Managing Director of the Million Dollar Al Adil Group, now entering the home market with Al Adil Supermarket that was launched in Khargar by actress Karishma Kapoor. Says Dhananjay Datar, "Karishma Kapoor was chosen to be the face of our inauguration as she represented the Indian woman of today, who is a perfect homemaker and yet is career-oriented. She is a perfect brand fit." 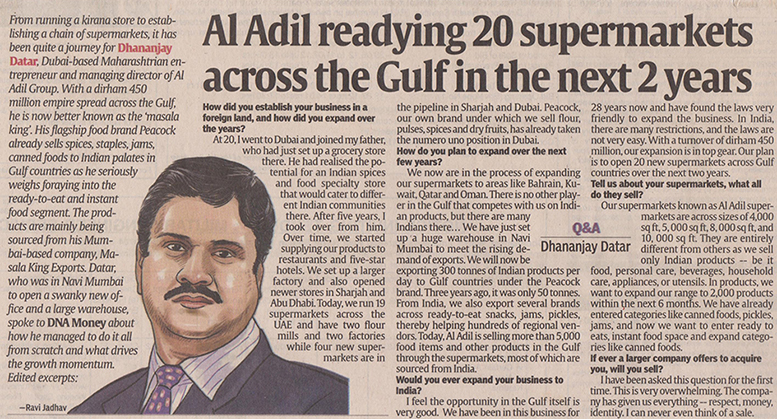 From running a kirana store to establishing a chain of supermarkets, it has been quite a journey for Dhananjay Datar, Dubai based Maharashtrian entrepreneur and Managing Director of Al Adil Group. With a dirham 450 million empire spread across the Gulf, he is now better known as the 'Al Adil'. His flagship food brand Peacock already sells spices, staples, jams, canned foods, to Indian palates in Gulf countries as he seriously weighs foraying into the ready to eat and instant food segment. The products are mainly being sourced from his Mumbai based company, Al Adil. Datar who was in Navi Mumbai to open a swanky new office and a large warehouse, spoke to DNA Money about how he managed to do it all from scratch and what drives the growth momentum. 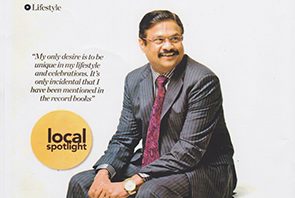 The Master Of Spices

Dhananjay Datar’s success story isn’t too different from that of the spice traders of the past who travelled great distances, started small ventures and then became hugely successful in foreign lands. Having begun as a small grocery store in Bur Dubai way back in 1984 with three employees, today Al Adil has grown into a spice empire serving the entire GCC and beyond, employing 375 people directly and about 500 in the UAE and India indirectly.