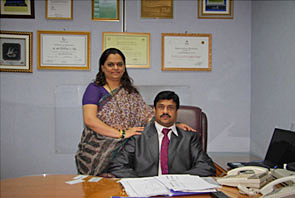 A Remarkable Growth By Dhananjay Datar

‘Masala King Dhananjay Datar has expanded his business in the Gulf, with Masala King Exports Trading 33 supermarkets in the UAE.

The years since 1984, when Masala King Exports Trading was established, saw Dubai getting onto the fast track of progress and development and the small grocery store kept pace with this rapid growth, evolving into a specialist supermarket chain with nine retail outlets; twelve in Dubai, four in Sharjah and three in Abu Dhabi, a manufacturing plant in the industrial area of Al Quoz in Dubai and an Indian export arm, Masala king Exports, doing business in the Indian sub-continent.

Today, Masala King Exports Trading sells the entire range of grocery and household items in the UAE including Indian spices and masala, pulses, rice and flour, oils and ghee, pickles and chutneys, tea and coffee, canned and instant foods, ayurvedic medicines and herbs, cosmetics, dry fruits, mouth fresheners and savouries, confectionery items and sweetmeats, etc. they have 8 shops in UAE - 21 in Dubai, 4 in Sharjah, 3 in Abu Dhabi and 1 in Ajman.

Its Al Quoz plant produces masala, spices, pickles, flours, pulses and other Indian foodstuff items under the Peacock brand name while Masala King Exports is one of the leading Indian exporters of quality branded Indian pulses, spices and other grocery items as well as non-food items.

Recognized as an ISO 9001:2000 Company in 2006, Masala King Exports Trading has won plaudits for its commitment to quality, including the prestigious Dubai Duty Free Best Supplier Award for Quality, Technology and Strategic Partnership in 2001, The Emirates Flight Catering Appreciation Award in 2003, and a Certificate of Appreciation from Jumeirah Hospitality the same year.

Today, Masala King Dhananjay Datar has expanded his business in the Gulf, with Masala King Exports Trading presence to 35 companies in U.A.E. This has happened at a time when the world was passing through recession and businesses were scaling down their sizes. He has employed an additional 100 Indians at his new stores, who are directly employed with him and has also created several indirect employment opportunities. Al Masala King Group also has three factories and two exports – import firms besides the nine supermarkets. 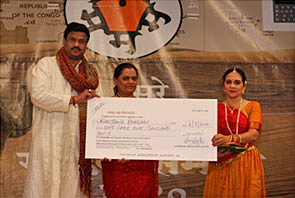 Be Independent In Business

I had just one pair of school uniform and couldn’t even afford an extra pair. We were taught by our parents to be very frugal. I learnt not to waste even one drop of ink – and that drop did come out, it was taught to suck it back into the pen. We were so conscientious of economizing. I was an average student at school and scored just about 45% to 50% overall and even disliked maths but I have even used this to my advantage. Knowing that I am not good in maths, I have the habit of rechecking and re–counting all the transactions, thus avoiding financial mistakes.

After retirement from the Indian Air Force, my father left for Dubai to take up a new job, I got my passport made at the age of 20 and joined my father there in 1984, when he started a small grocery shop named ‘Masala King Exports Trading’ in Dubai. Even after owning a shop, my father imparted practical business lessons by making me work part time for others. He did not want me to feel like an owner from day one and expect the workers to do all the work, while I just sit around like an arrogant boss. He wanted me to start from scratch and reminded me that no work is lowly enough. I even used to wipe the window panes of those shops; I used to work for 16 hours a day, but never complained about the work. Don’t shy away from your job was the great tutelage for me from this experience.

While carrying on the business, respect the customer and earn his respect. If you are doing business in a different state or country, you must respect the people and culture from there. In Rome, do as Romans do don’t project yourself a businessman, hastily after entering any business. One always keeps learning from one’s business. I am still learning new things of doing business.

One should not get disheartened if one fails in business or incurs losses. There is bound to be stress. But that doesn’t mean one should give up one’s business and opt for a job, to avoid incurring losses. All this is part of your business. There are bound to be highs and lows. After sometime, the mind and body gets used to this kind of a stress. So don’t give up.

Cherish the three virtues – be hardworking, courageous and confident. People chase turnover, but that is wrong. You should take care of profits instead. I have concentrated on this sole thing and hence could achieve a 40% higher profit even in the storm of recession.

RELIGIOUS RITUALS AT A HEIGHT OF 40,000 FEET

Thread ceremony of Datar’s son conducted in the skies; a first of its kind event in a jet plane.

Thread Ceremony of Datar’s younger son Rohit was held 40,000 ft. above Mumbai atop a jet flight. Vandana and Dhananjay Datar along with sons Hrishikesh and Rohit.

Dubai-based businessman, Dhananjay Datar organized a unique thread ceremony of his son, Rohit. The difference about this thread ceremony was that it was done in a jet aircraft, which hovered at a height of 40,000 ft. above Mumbai, carrying 150 family members and guests dressed in traditional Maharashtrian attire, most of who were aboard a flight for the first time in their lives. This was the first of its kind event in India.

On Sunday, December 21, 2008 at 10.00 a.m., the chartered flight took off from the domestic terminal at Chhatrapati Shivaji International Airport. As the aircraft flew above the city, 10 year old Rohit Datar received blessings from relatives. His father Dhananjay, who has been living in Dubai for the last 30 years, said the idea of conducting the ceremony aboard a plane stemmed from Rohit’s love of flying. “Plus, I thought it would be great to take my friends and family on an aero plane ride, while they bless Rohit,” said Dhananjay, who owns a chain of supermarket in Dubai. His wife Vandana and elder son, Hrishikesh, were also present at the ceremony.

The ceremony consisted of the traditional Ganesh Pooja, wearing the thread and reciting sacred mantras (mangalashtak). The havan was, however, performed at a 5 star hotel, Royal Palm Hotel at Goregaon, where they had booked 300 rooms and 20 villas for two days’.

“My father, Mahadeo wanted to perform my younger son Rohit’s thread ceremony on a plane” Datar said unfortunately he died a fortnight ago. But we decided to go ahead with the plans as per his wish. My father wanted to spread our culture. Holding the ceremony in the skies is symbolic it’.

The priest, Vilas Parekar, from Dombivili said, Blessing from the sun is sought in a thread ceremony. We reached closer to the sun by performing it on the plane, in fact, the two priests, Vilas Parekar and Sanjay Joshi had never stepped aboard an aircraft.

Rohit, a class seven student of Dubai’s Wellington International School, said he felt like a king.’ I told all my friends abroad about this tradition, he said.

The Datar’s have registered their names in Limca book of Records and the Guinness World Records. That’s not all, 40 other guests were given helicopter rides in two chartered choppers, which took off from the Juhu airport, on 8 sorties, making it a truly memorable celebration in the skies. This event again caught the media attention as it has never been done before in India.

And after the flight landed on Sunday, a baraat ceremony was organized with elephant’s et al – truly a royal event, in every aspect.